“Desa” in English is the village, in this case means the place. This meant that all Balinese life activities in will vary between one place to another. So do not rush just think it’s wrong because it’s different.

“Kala” in English this means time. As time progressed, everything changed. Which can only follow a change that is lasting. In other words, change is eternal. For example….. previous, much used in ceremonies such as the food….. thrown away after use, probably because the food is unpopular or are there other things. Now….. they create and use a good meal and be liked for the ceremony so that it can be eaten immediately after use. This is more effective…..

“Patra”, this latter means that circumstances. Circumstances of a person or society that will affects all the things done and made. May be sick, healthy, happy, miserable, rich, poor, and others … 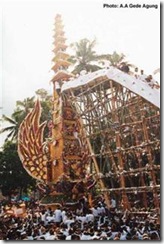 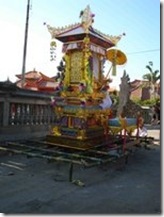 Look at both photo above for one example case….. It is used in Ngaben ceremonies used to carry bodies to the cemetery for cremation process. There that use high and there is also mediocre. It does not matter. Besides influenced social strata, is also influenced by three factors above. Using high will also increase the expenditure to terminate and reconnect the many electrical and telephone wires leading to the cemetery.

Essentially all of that done aboveboard. Held ceremony with a big cost compared to a cost-effective….. have separate portions.

The above three things made flexible in Balinese life.

Pengrupukan: a day before Nyepi

Tomb above the ground in Indonesia