In general, Ngaben ceremonies in Bali are bodies burning ceremony that aims to purify the spirits of ancestors. When someone dies, corpse could be buried before or directly burned and cleansed his soul with Ngaben ceremony. This ceremony is considered a big ceremony and will cost a lot. Even so the whole family rejoiced implement.

The following article comes from Balibagus.com and the photo by me. 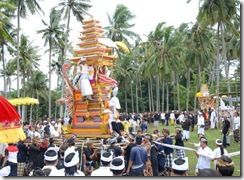 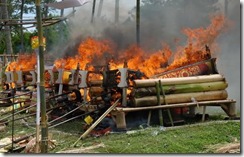 Hindu funerals in Bali are intensely suggestive ceremonies of great cultural and religious significance. Funerals are centred on cremation of the body requiring a complex apparatus and characterized by a large following known as ngaben or pelebon. This practice is considered essential if the 5 elements making up the microcosm of the human body are to be returned to their original residence, the universe’s macrocosm. The five elements, Panca Maha Bhuta, are the earth (pertiwi), water (apah), fire (teja), air (bayu), and ether (akasa). Since the primordial dimension can only be attained through water and fire, the ashes are dispersed in the water of the sea or if the distance is too great, in a river. The funeral ceremony is generally led by a priest and punctuated by a lavish offering of gifts. For the occasion, a large bullock-shaped wooden structure is built and then entirely covered with white drapes if the deceased belongs to a priestly caste–in black.

There are ceremonies for every stage of Balinese life but often the last ceremony–cremation–is the biggest. A Balinese cremation can be an amazing, spectacular, colourful, noisy and exciting event. In fact it often takes so long to organize a cremation that years have passed since the death. During that time the body is temporarily buried. Of course an auspicious day must be chosen for the cremation and since a big cremation can be very expensive business many less wealthy people may take the opportunity of joining in at a larger cremation and sending their own dead on their way at the same time. Brahmans, however, must be cremated immediately. Apart from being yet another occasion for Balinese noise and confusion it’s a fine opportunity to observe the incredible energy the Balinese put into creating real works of art which are totally ephemeral. A lot more than a body gets burnt at the cremation. The body is carried from the burial ground (or from the deceased’s home if it’s and ‘immediate’ cremation) to the cremation ground in a high, multi-tiered tower made of bamboo, paper, string, tinsel, silk, cloth, mirrors, flowers and anything else bright and colourful you can think of. The tower is carried on the shoulders of a group of men, the size of the group depending on the importance of the deceased and hence the size of the tower. The funeral of a former rajah of high priest may require hundreds of men to tote the tower.

A long the way to the cremation ground certain precautions must be taken to ensure that the deceased’s spirit does not find its way back home. Loose spirits around the house can be a real nuisance. To ensure this doesn’t happen requires getting the spirits confused as to their whereabouts, which you do by shaking the tower, running it around in circles, spinning it around, throwing water at it, generally making the trip to the cremation ground anything but a stately funeral crawl.

Some photos from Ngaben ceremony you can look below. I take photo from funeral home until the cremation but not so detailed. Click the picture if you want about picture information.

Bali Arts Festival: that you get if visiting Bali on mid June